In his address, "The Love and Laws of God," given at Brigham Young University in Provo, Utah, on September 17, 2019, Pres. Nelson said:

"We may not always tell people what they want to hear. Prophets are rarely popular. But we will always teach the truth!

My dear young friends, exaltation is not easy. Requirements include a focused and persistent effort to keep God’s laws, and rigorously repenting when we don’t. But the reward for doing so is far greater than anything we can imagine, because it brings us joy here, and 'never-ending happiness'  hereafter.

Thus, our commission as Apostles is to teach nothing but truth." [1]

OK, great: Apostles teach nothing but the truth. Got it. Now, with that in mind, let's stroll down a bit of Brigham Young University Memory Lane. It's important.

Dallin H Oaks served as BYU's President from August 1971 – August 1980 [2]. During that time, Gerald J. Dye oversaw the University Standards Office (renamed the Honor Code Office in 1991). [3] Dye stated that during that decade part of the "set process" for homosexual BYU students referred to his office for "less serious" offenses was to require that they undergo some form of therapy to remain at BYU, and that in special cases, this included "electroshock and vomiting aversion therapies." [4].

Here is an excerpt from the Wikipedia article on BYU electroshock aversion therapies (all source citations are found in the article, here (https://en.wikipedia.org/wiki/Brigham_Young_University_LGBT_history):

'In an independent BYU newspaper article two men describe their experience with the BYU Aversion therapy program during the early 1970s.[89]: 162  After confessing to homosexual feelings they were referred to the BYU Counseling Center where the electroshock aversion therapy took place using pornographic pictures of males and females. Jon, one of the individuals, implied that the treatment was completely ineffective.[90] The experiences match most reports which state that shock therapy was ineffective in changing sexual orientation.[91]

From 1975 to 1976 Max Ford McBride, a student at BYU, conducted electroshock aversion therapy on 17 men (with 14 completing the treatment) using a male arousal measuring device placed around the penis and electrodes on the bicep. He published a dissertation on the use of electrical aversive techniques to treat ego-dystonic homosexuality.[92] The thesis documents the use of "Electrical Aversion Therapy" on 14 homosexual men using a "phallometric" apparatus, "barely tolerable" shocks, and "nude male visual-cue stimuli."[93][94] Although it is not publicly published whether all top LDS Church leaders were aware of the electroshock aversion therapy program,[95] it is known that apostles Spencer W Kimball, Mark E. Peterson, and now apostle Dallin H. Oaks were,[2]: 379  and leaders involved in LDS Social Services thought the therapy was effective.[96][40]: 164–165  At the time, homosexuality was considered by the medical community as a psychiatric condition,[97] and aversion therapy was one of the more common methods used to try to change it.[98] In 1966, Martin Seligman had conducted a study at the University of Pennsylvania that demonstrated positive results, which led to "a great burst of enthusiasm about changing homosexuality [that] swept over the therapeutic community."[99] After flaws were demonstrated in Seligman's experiments, aversion therapy fell out of popularity, and in 1994 the American Medical Association issued a report that stated "aversion therapy is no longer recommended for gay men and lesbians."[100]

Participant in the 1975–76 BYU study Don Harryman wrote that he experienced "burns on [his] arms and ... emotional trauma."[101][102] Another participant, John Clarence Cameron, who wrote a play called "14" about his experiences, said "it didn’t change anything except increase my self-loathing. I didn’t know the ramifications of the experiment until years later."[103] Cameron stated that he "would like everyone to tell the truth, admit the mistakes that took place, and stop trying to act like it didn't happen"[104] Another one of the test subjects described his experiences, stating "No one wanted to change more than I did. I did everything within my power to change, and it didn't alter my homosexuality one whit. All I had learned to do was suppress much of my personality ... I was shutting down, turning off.... I was making my life miserable by a pervasive denial of who I am."[105]

In 2011 BYU admitted to the past use of electroshock therapy but denies that it had ever used vomit-inducing therapy "in the BYU Counseling Center"[93] (which has been in the Wilkinson Student Center since 1964). However, the students that underwent the treatment have stated that the vomit therapy took place in the basement of the Psychology department's Joseph F. Smith Family Living Center (built in 1957, demolished in 2002).[106][113]"

Even BYU admitted that electroshock aversion therapy was conducted in the 1970s [5] by Max Ford McBride, then a Psychology Department graduate student. A copy of his August 1976 thesis paper, "Effect of Visual Stimuli in Electric Aversion Therapy," can be found here. August 1976 falls right in the middle of Oaks' tenure as BYU President. 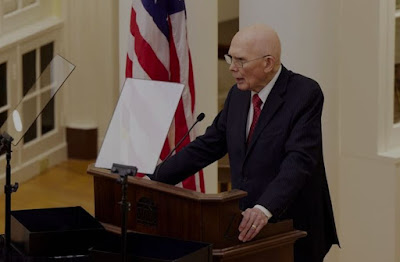 On November 12, 2021, Oaks participated in a forum at the University of Virginia School of Law. [6] Here is a brief snippet of Oaks' remarks there:

Oaks is a former President of BYU (1971-1980) who oversaw the use of electroshock and vomiting aversion therapy on LGBTQAI+ students. When questioned about this at today’s event, he claimed that these practices ended before his tenure. This is demonstrably false. pic.twitter.com/C0mmwiqcwY

Here is a transcript of his quote:

"Let me say about electric shock treatments at BYU. I became presdient at BYU, that had been discontinued earlier and never went on under my administration." [7]

You can add this one to the discussions about Pres Nelsons' "Flight of Death" and Elder Holland's talk about the missionary and his brother.

Nevertheless, "Oaks declined to comment on the discrepancy between his memory and the research, church spokesperson Doug Andersen said Monday." [8]

So we are left with two options: Either Oaks is suffering from memory loss or he lied. And the church's unwillingness to comment only deepens the suspicion.

Given Oaks' reticence to apologize or comment on his statement -- as well as his position in the First Presidency, Quorum of the Twelve and his position as Nelson's heir-apparent -- it looks like now is the appropriate time for us to bid a fond adieu to the church's claim that "We’re as transparent as we know how to be."

Although some might say it's been like this for decades or even generations, we can now consider the following quotes to be invalid re: the LDS Church:

“We would have to say, as two apostles who have covered the world and know the history of the Church and know the integrity of the First Presidency and the Quorum of the Twelve from the beginning, there has been no attempt on the part of the Church leaders to try to hide anything from anybody.” [9]

“Just trust us, wherever you are in the world, and you share this message with anyone else who raises the question about the Church not being transparent. We’re as transparent as we know how to be in telling the truth. We have to do that; that’s the Lord’s way.” [9]

“My view is that being open about our history solves a whole lot more problems than it creates. We might not have all the answers, but if we are open (and we now have pretty remarkable transparency), then I think in the long run that will serve us well. I think in the past there was a tendency to keep a lot of the records closed or at least not give access to information. But the world has changed in the last generation — with the access to information on the Internet, we can’t continue that pattern; I think we need to continue to be more open.” [10]

“Well, we have nothing to hide. Our history is an open book. They may find what they are looking for, but the fact is the history of the church is clear and open and leads to faith and strength and virtues.” [11]

It will be interesting to see if God ever calls this proven liar to be his "mouthpiece" to the world.

"Lying is sinful, as it has always been, and there is no exempt category for so-called lying for the Lord. Lying is simply outside the range of permitted or condoned conduct by Latter-day Saints members or leaders." (Dallin H. Oaks, Gospel Teachings About Lying, address to faculty, students, and alumni of BYU on September 12, 1993)

I have a few questions for Pres. Oaks: