A friend alerted me today to the new "Virtual Book of Mormon" (bom.byu.edu) which includes "Book of Mormon maps and learning tools."

As the (non-SSL, unsecured) website is a subdomain of byu.edu, it can be strongly implied that it's an official project of BYU. I mean, for something as significant as the domain name bom.byu.edu, it's gotta be some pretty significant BoM information.

Even though the website states that "The Church and BYU stay neutral in questions of exactly where the Book of Mormon took place," the images it posts look strangely familiar: 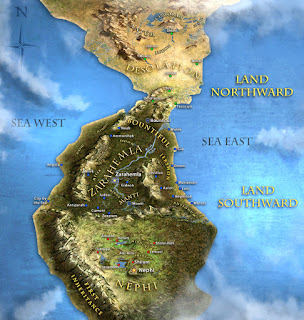 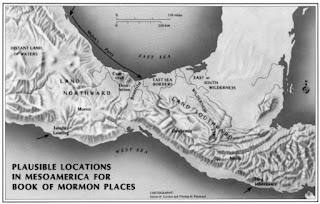 The Mesoamerican theory of the Book of Mormon postulates that the events of the book happened in Central and South America. However, "Nearly all those familiar with the early statements by the Prophet touching on potential Book of Mormon lands know that he clearly indicated them to be in North America. This is evident in the historically verified accounts wherein he declared revelation such as in the Wentworth Letter, the American Revivalist Account, the Zelph Accounts and Joseph’s handwritten letter to Emma while on Zion’s camp. In addition, the prophet revealed a Nephite altar at Adam-ondi-Ahman, mentioned the land of Manti was near Huntsville, Missouri, and revealed that this land was “the borders of the Lamanites” (see D&C 54:8). Furthermore he received revelation from the Lord for the location of Zarahemla (see D&C 125:3) and New Jerusalem (see D&C 84:1-6) which Christ Himself declared to be on Book of Mormon lands (3 Nephi 20:22), both of which are absolutely located in North America. These accounts and their indications are not speculation based, but historically documented fact." [1]

But the even more fascinating aspect of the website is the "Donate" page.

Believe it or not, this BYU-affiliated project needs "funds to continue to build and improve them" (these online learning resources). Those wishing to donate can leave their contact information, "and a representative from the Dean's Office will contact you" -- another indication that it's a BYU-affiliated project, yet without any posted project synopsis, timeline, budget, scope...nothing.

Based on the aforementioned facts, I have the following questions for Elder Uchtdorf: