When the Brethren’s Lack of Discernment Cost Lives, the Church's Reputation and Funds

"Murder Among the Mormons"

On the morning of Oct. 15, 1985, a homemade bomb exploded in downtown Salt Lake City, killing financial consultant Steve Christensen, who collected historical documents. Shortly afterwards, a second bomb went off in Holladay, UT, killing Kathy Sheets, the wife of Christensen’s former boss.
The next day, a third bomb went off in a car parked in downtown Salt Lake City. It seriously injured document dealer Mark Hofmann and set off an investigation that lasted more than a year, resulting in Hofmann’s lifetime imprisonment.
35 years later, most members have only a vague recollection at best regarding Mark Hofmann and his murders.  [7]
What most don't remember is another victim of Hofmann's maniacal mayhem: the church's reputation.
Why do I bring this up now? Because on Wednesday, March 3, Netflix is streaming a three-part series (“Murder Among the Mormons”) about Mark Hofmann, his forgeries, murders and deceptions of the Church’s highest leaders.

The Church Deceived in 1980

In 1980, Hofmann claimed that he had found a 17th-century King James Bible with a folded paper gummed inside. [8]  The document seemed to be the transcript that Joseph Smith's scribe Martin Harris had presented to Charles Anthon, a Columbia classics professor, in 1828. According to Joseph Smith–History, the transcript and its unusual reformed Egyptian characters were copied by Smith from the golden plates from which he translated the Book of Mormon.
Hofmann actually constructed his version to fit Anthon's description of the document, and its discovery made Hofmann's reputation. Dean Jessee, an editor of Joseph Smith's papers and the best-known expert on handwriting and old documents in the Church’s Historical Department, concluded that the document was authentic. The Church announced the discovery of the Anthon Transcript in April and purchased it from Hofmann for more than $20,000. [9] 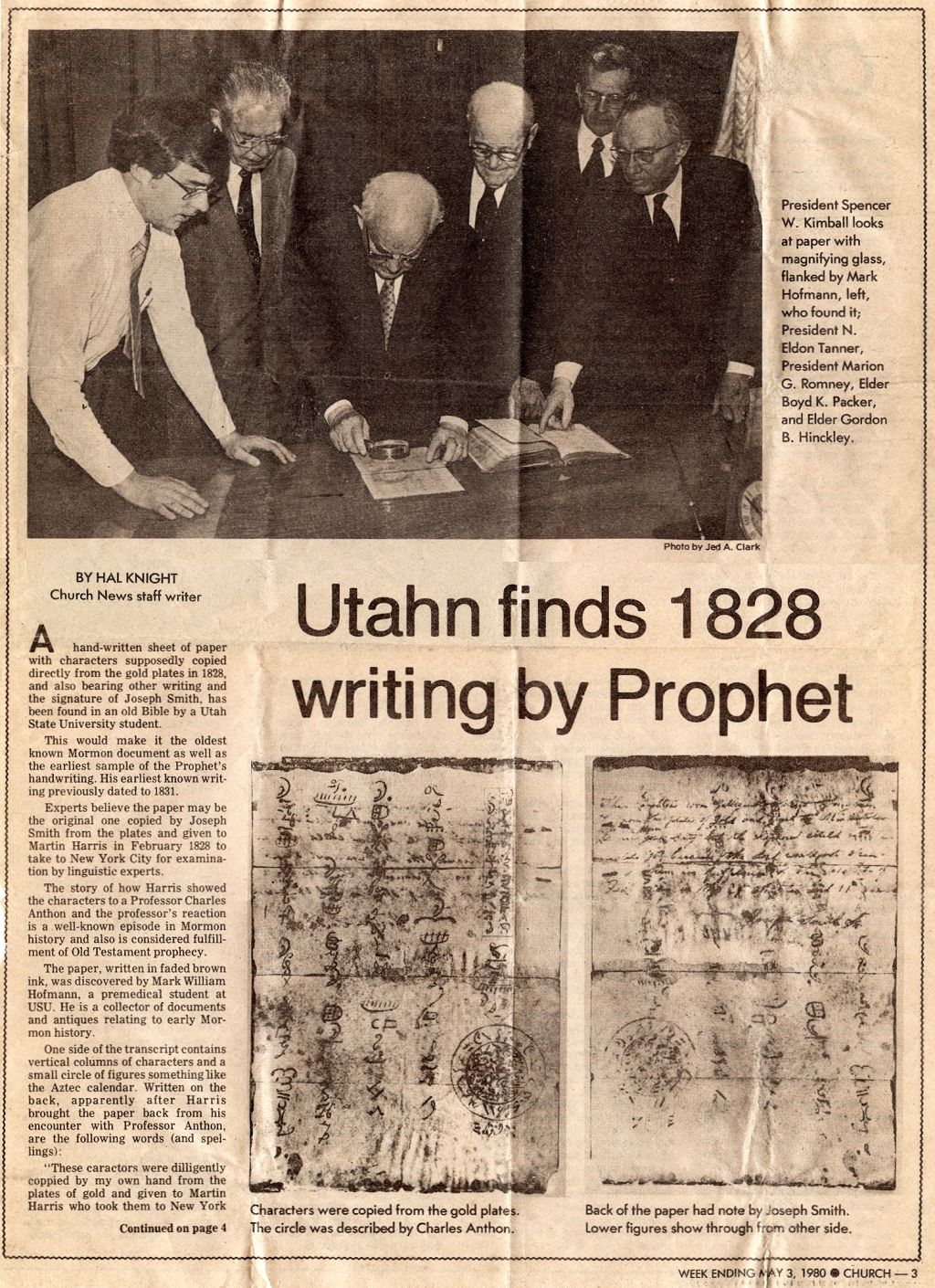 Why can't discernment no longer help true prophets and apostles detect when a forger and soon-to-be murderer is standing right next to them selling a bogus document?

The Church Deceived in 1981

Hofmann arrived at Church Headquarters with a document which supposedly provided evidence that Joseph Smith had designated his son, Joseph Smith III (rather than Brigham Young) as his successor. In a forged cover letter, purportedly written by Thomas Bullock and dated January 27, 1865, Bullock chastises Young for having all copies of the blessing destroyed. Bullock writes that although he believes Young to be the legitimate leader of the LDS Church, he would keep his copy of the blessing. Such a letter, if true, would portray Young and, by extension, the LDS Church, in an unfavorable light.
Hofmann tried to sell the letter to the Church’s chief archivist. Hofmann expected the church to "buy the blessing on the spot and bury it." When the archivist balked at the price, Hofmann offered it to the RLDS Church (now known as the Community of Christ), which had always claimed that the line of succession had been bestowed on Smith's descendants but had never had written proof. A scramble to acquire the document occurred, and Hofmann, posing as a faithful member, presented it to the LDS Church in exchange for items worth more than $20,000. [10]

Gordon B. Hinckley Deceived in 1983

Hofmann bypassed the LDS Church's historical department and sold, for $15,000 to Gordon B. Hinckley (then second counselor in First Presidency), an 1825 Joseph Smith holograph purporting to confirm that Smith had been treasure hunting and practicing black magic five years after his First Vision. Then Hofmann leaked its existence to the press, after which the church was virtually forced to release the letter to scholars for study, despite previously denying it had it in its possession. [11]

The Church Deceived in 1984

This is where we discuss the famous "Salamander Letter" -- a (forged) letter purported to reveal that a magical salamander guided Joseph Smith to the gold plates. It’s a shocking contrast to the Church’s orthodox account, which says the Angel Moroni appeared to Smith and led him to the plates. Hence the belief that the church bought controversial documents to hide them from the general public.
Hoffman sold the forged “Salamander letter” to Steven F. Christensen on January 6, 1984, who then donated the letter to the church on April 12, 1985. Hinckley accepted the donation. [12]

On October 15, 1985, Hofmann killed document collector Steven Christensen (as well as injuring a secretary in the leg with shrapnel). Later the same day, a second bomb killed Kathy Sheets, the wife of Christensen's former employer.
On the afternoon following the bombings, Hofmann met with LDS Church apostle Dallin H. Oaks about the McLellin collection, a meeting which fellow document collector Brent Metcalfe believed had religious significance to Hofmann. "He's just killed two people. And what does he do? He goes down to the church office building and meets with Dallin Oaks. I can't even imagine the rush, given Hofmann's frame of reference, that this would have given him. To be standing there in front of one of God's appointed apostles, after murdering two people, and this person doesn't hear any words from God, doesn't intuit a thing. For Hofmann that must have been an absolute rush. He had pulled off the ultimate spoof against God." [13]
Regarding that meeting, Oaks said Hofmann expected to be questioned by the police regarding the murders. ''He said he was worried about what he should say to them,'' said Oaks. ''I told him he should just answer their questions and tell them the truth.'' After about 10 minutes, Oaks said, Hofmann left.” [14]
The following day, Hofmann himself was severely injured when a bomb exploded in his car. Although police quickly focused on Hofmann as the suspect in the bombings.

The Church Publicizes its Purchased Forgeries

On April 28, 1985, the Church News published the full text of the Salamander Letter. This solidified the fact that the church had been unknowingly purchasing forged historical documents, with church funds, from Hofmann before the bombings.
“But during the investigation, it has become evident that high officials of the Church of Jesus Christ of Latter-day Saints were doing a brisk business with Hofmann. Hinckley said at a press conference that, starting in 1980, he had purchased about 40 documents from Hofmann. Only a few of them have been made public; others are in a church vault. Whether they cast any new light on the church's past is not known.”
Hinckley himself fielded criticism for some time for "being duped" and being "unable to discern the evil intentions of a man like Hofmann". Hinckley later noted:
“I frankly admit that Hofmann tricked us. He also tricked experts from New York to Utah, however. We bought those documents only after the assurance that they were genuine. And when we released documents to the press, we stated that we had no way of knowing for sure if they were authentic. I am not ashamed to admit that we were victimized. It is not the first time the Church has found itself in such a position. Joseph Smith was victimized again and again. The Savior was victimized. I am sorry to say that sometimes it happens.” [15]

1987: The Church’s Official Admission of Being Duped

In the October 1987 Ensign Magazine, the Church published a list of forged documents that had been referenced in the Ensign so that readers would not refer to them in error. [10]
In the same magazine, Dallin H. Oaks explained the extent of the church’s dealings with Hofmann:
“What President Hinckley said was that he had purchased two documents, and Church History Department personnel had acquired the rest.” [16]
Oaks then defined what made up the totality of the documents acquired…
“On 11 April 1986, after months of searching through its records and collections, the Church published a complete list of the forty-eight documents and groups of court records then known to have been acquired from Mark Hofmann. That list spoke for itself: It was a mixture of the already-published, the intriguing, the routine, and the trivial. Now, over a year later, we know that some of the forty-eight are forgeries, because they were named in the criminal charges and confessed by Hofmann during his questioning by prosecutors.”
…and the associated costs:
“all of these documents were listed publicly over a year ago, together with their total cash purchase price of $57,100, plus traded documents of undetermined value.” [16]
But why were Hofmann's deceits not detected by the several Church leaders with whom he met? Here's Dallin H Oaks again...
“In order to perform their personal ministries, Church leaders cannot be suspicious and questioning of each of the hundreds of people they meet each year. Ministers of the gospel function best in an atmosphere of trust and love. In that kind of atmosphere, they fail to detect a few deceivers, but that is the price they pay to increase their effectiveness in counseling, comforting, and blessing the hundreds of honest and sincere people they see. It is better for a Church leader to be occasionally disappointed than to be constantly suspicious." [16]