Yesterday, I was pleasantly surprised by a story, written and posted by the Associated Press, about the expanding influence of women in the church. Entitled "Mormon women's influence expands despite priesthood ban," it highlights the progress women have made in the church since the first spark of the Restoration. Baby steps? Yes. But also very solid, inspiring ones.

Sharon Eubank: The Revolution within an Evolutionary Church

In my opinion, no one personifies this progress better than Sharon Eubank, who is shown atop the article in a photo of her sitting beneath portraits of past General Relief Society Presidents. Although she is not herself such a president, she is currently First Counselor in the General Relief Society, president of Latter-day Saint Charities (the church's humanitarian arm) and is the church's de facto Ambassador to the United Nations (go here and here to read my previous posts about her UN associations).

In my opinion, you have to travel back in time to Emma Smith to find a woman as potentially influential in the church as Sharon Eubank. Just as Emma was instrumental in the early, formative steps of the church, Sharon is perhaps the point person in helping the church obtain respect and acceptance among world leaders, especially the United Nations, its non-governmental organizations and the Catholic church.

She is not only influential, but unique as well. As the AP story points out, Eubank "is neither married nor a mother but glad to embody a different image of womanhood as one of the top female leaders in the male-dominated faith widely known as the Mormon church." In a church and a (Utah-centric) society where temple marriage is equated with exaltation, her status as a single woman (confirmed by the church here)  - in such elevated levels of leadership - is striking.

The Ring of a Thousand Questions

Intrigued by the articles I've linked to above, I sat down today to watch a few of the General Conference addresses she's given. And it's there that I saw something which confused me:

Sharon Eubank is wearing a ring on her left-hand ring finger…in not one, but two Conference addresses and one international forum.

Click here to view her April 2019 General Conference address. She displays a ring, on her ring finger, at the 9:27 mark: 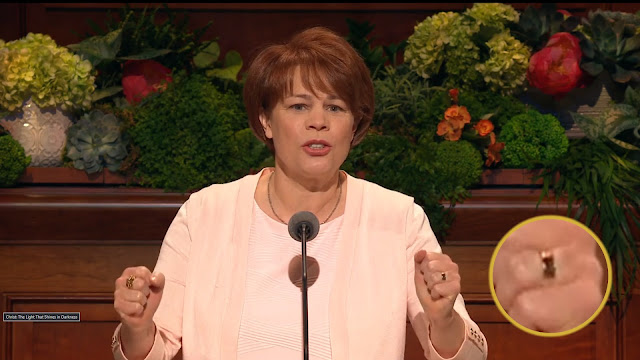 She again displays a (possibly different) ring on her ring finger in a photo taken of her interacting in a G20 Interfaith Forum on Saturday, Oct. 17, 2020: 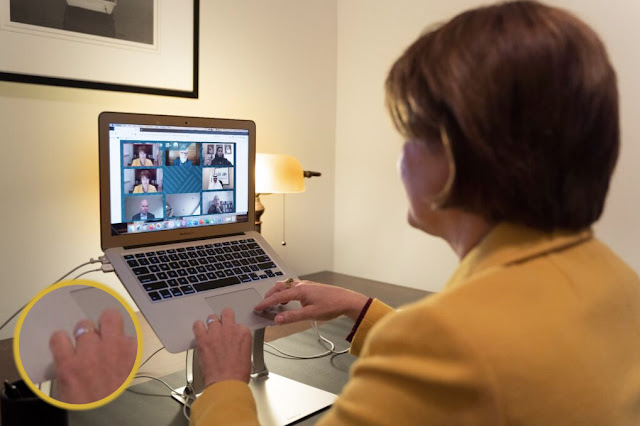 Finally, she's seen wearing a ring at the 3:12 mark during her October 2021 General Conference address: 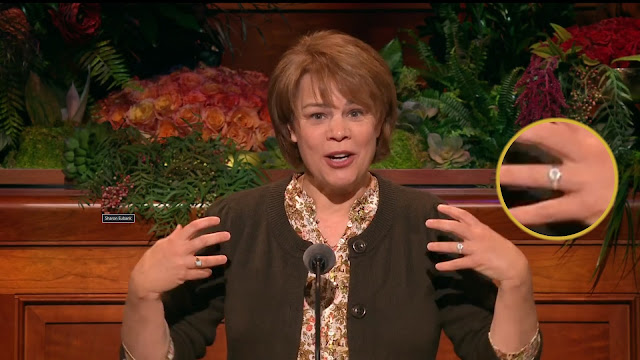 It's my understanding that there are three commonly agreed-upon reasons why a woman would wear a ring on her ring finger:

I wonder which one of these pertains to Sharon Eubank.