The word “Mormon”: You’d be surprised who has – and is – literally embracing this reported curse word.

Of all the swear words we members are exposed to, one of the most vicious, brutal and evil is this word: Mormon.

Even Pres. Nelson said in 2016 that those who use such nicknames are scoring "a major victory for Satan" and "are subtly disregarding all that Jesus Christ did for us-even His Atonement." [1]

That's a pretty heavy condemnation for those who have or still do use this nickname.

Today, church members readily accept the divinity of Pres. Nelson's declaration. I read one account online of a man who asked a relative, "Do you really think using Mormon is gone forever?" His response: "Absolutely, because a prophet of God has told us so by revelation and I have received personal confirmation from the Spirit."

Thus, the word "Mormon" is so despised within our church, that it's even being equated with another racial epithet (as explained by one person on a Facebook group): 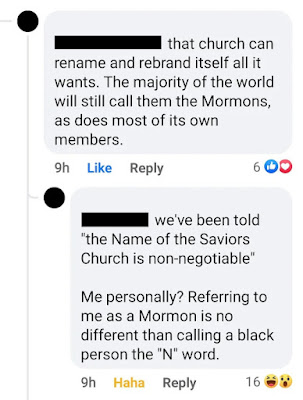 With the hypersensitivity and persecution complex now going off the charts among members, I thought it might be helpful to see who exactly scored these victories for Satan in the past…and still do, today. More importantly, we'll see why…

The word "Mormon" is perhaps THE most significant
doctrinal dilemma in the church today.

The Shocking History of Who's Used the Word "Mormon"

Perhaps the most notable difference in opinions is found between Presidents Nelson and Hinckley. Here's a side-by-side comparison of President Hinckley from the October 1990 General Conference, and President Nelson from the October 2018 General Conference. It was one of the few instances in the church's history when one church president (in this case, Nelson) openly, publicly disputed the supposedly inspired words of another church president (Hinckley).

Since that exchange, the church - under Presidents Hinckley and Monson - launched aggressive, worldwide promotions of the word "Mormon":

One of the most prominent church-based promotions has been its member-oriented "Mormon Helping Hands" humanitarian efforts, which are best known by members wearing yellow vests/t-shirts which include a certain curse word: 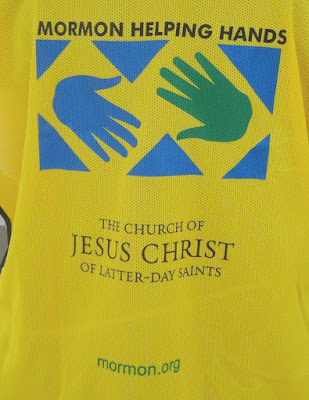 Here's a Sept. 4, 2016 picture of President (then Elder) Nelson meeting with some of the 5,000 Church members who assisted in Louisiana disaster relief efforts. See how upset he is with that "Mormon" word on all those vests?

Other leaders who actually wore the "Mormon Helping Hands" vest/t-shirt include:

Today, Deseret Book (which is owned by the church) [15] sells many books and/or videos online containing the word "Mormon," including:

Also, when you type the satanic victory terms Mormon.org or LDS.org into your internet browser, you're redirected to -- you guessed it -- the church's website.

So here we have perhaps the greatest doctrinal dilemma in the church today.

On one side we have…

On the other side, we have…

Pres. Nelson, who was allegedly "impressed" by the Lord to say that those who use the word "Mormon" offend the Lord, score "a major victory for Satan" and "are subtly disregarding all that Jesus Christ did for us-even His Atonement."

That's THE question regarding usage of the word "Mormon." This is because:

"God is the same yesterday, today, and forever, and in him there is no variableness neither shadow of changing?" [18]

What God says applies eternally. This is only logical because…

How can we trust God's promises
if He's liable to change His mind?

So, let's take God at his word and assume he doesn't change, and that we CAN trust his promises. We are then left with a tremendous dilemma:

If Pres. Nelson is correct, and usage of the word "Mormon" is indeed offensive to God, then..

If Pres. Nelson is wrong, then…

You can't have Pres. Nelson's predecessors be doing a supposedly acceptable thing to the Lord for generations, only for the Lord to change his mind and all of a sudden, it's bad. God doesn't change the rules in the middle of the game.

So, here's a question to answer in this day and age where we are told we can unequivocally trust church leaders:

Who's right: President Nelson or his predecessors? You can't have it both ways.

Nelson is wrong. God has more important things requiring the church leaders' -- and our -- attention:

These are tremendously significant, weighty issues which far, far outweigh any focus on the name of his church.

I won't win any awards with this comment, but Nelson is an idiot and a vindictive idiot at that.

Personally. I think the whole "Mormon" thing is about getting back at Gordon B. Hinckley. He is also on a temple building tear, again I think to 'beat' Hinckley in that department.

Mine is just the opinion of a man, but Nelson is no prophet. Of that, I'm 100% certain.

@Michael: Sadly, I think you're spot on.

You're simply saying what we're all thinking.

I would think Jesus is more offended that a church would claim to be His, but worship men instead.

I agree. I think that is why nelson has made all these changes. He wants a legacy and he has it.

When Dan Jones met the prophet Joseph for the first time the prophet played a joke on him.
He had one accomplice helping Dan offload his belongings from the boat and Joseph came down the street acting drunk. The accomplice asked Dan what he thought of that and his reply was "I guess we have a drunk prophet" and went about his business without skipping a beat.
I sustain Pres Nelson as the Lord's anointed. What he does in that capacity is between him and the Lord.
I have intelligence, free agency and the ability to critically think and I do not bow to any man.
I see what the church leaders are doing/ saying and I come to the conclusion that I take from their words the best parts and discard the rest.
Everyone keeps acting like they are perfect or getting upset when they say or do things that show that they are not.
The fact remains that no man, save Jesus, has, or ever will, be perfect while walking in this hellhole.
Every man will stand alone before the bar of God to be judged.
For that reason, I will not abdicate my ability to act for myself to any man, prophet or not.
Let's promote critical thinking and personal accountability instead of armchair quarterbacking what those in authority are doing that we disagree with.
That's petty and, IMO, just shows how dependent upon them we wish we could/should be.
Everyone will get their just desserts served up.
Let's be pillars of truth that anyone can look to and for which those seeking greater light and knowledge can thank God for.
My two cents.

Does a man become a prophet simply because other men vote it to be so? Or because other people proclaim it to be so? Or because he rises to the top of an organization? The pope has all of these things. Does he then qualify as a prophet? I simply ask because I can see zero evidence that Nelson is anything other than a corporate executive that is in love with himself. I've looked for his fruits and I can find none. Neither would God vouch for him when I asked.

If you have evidence of their fruit then by all means, please share.

How to become a "prophet" in the Brighamite corporation:

1. Bring in a lot of money to the corporation.
2. Outlive all the others who did.

Dallin H. Oaks, 2016 Bellevue, Washington Multi-Stake Youth Fireside minute 30ish...."I have not had the 'Alma' experience and neither has any of the top leaders of the church...(paraphrased) This means that none of them has ever in their worldly led lives ever repented of the natural man and received of the power of the Father's baptism of fire and of the Holy Ghost......This is what makes a man or woman a prophet(ess)It is also required to become a true apostle of Jesus Christ which requires a personal revelation again from the Father witnessing that Jesus IS the Christ and the Savior and Redeemer of mankind.......Worldly men of renown cannot be prophets until and unless they repent in the depths of humility and broken hearted repentance forsaking the natural man and seeking to be healed of God.......not 'one prayer and done'...you seek it with full purpose of heart for as long as it takes weeks perhaps of singleness off heart, might, mind and strength. Whatever until the REAL EVENT is put upon you by the visitation of the power of the Father after you unrelenting Faith in Jesus Christ promise to heal you of the natural man......without it you ARE A NATURAL MAN AND ENEMY TO GOD.