I'm not making this up (I'm not THAT creative). And this isn't a joke.

There's a new primary song being sung in the homes and (inevitably) classrooms of Latter-day Saints. Here it is: 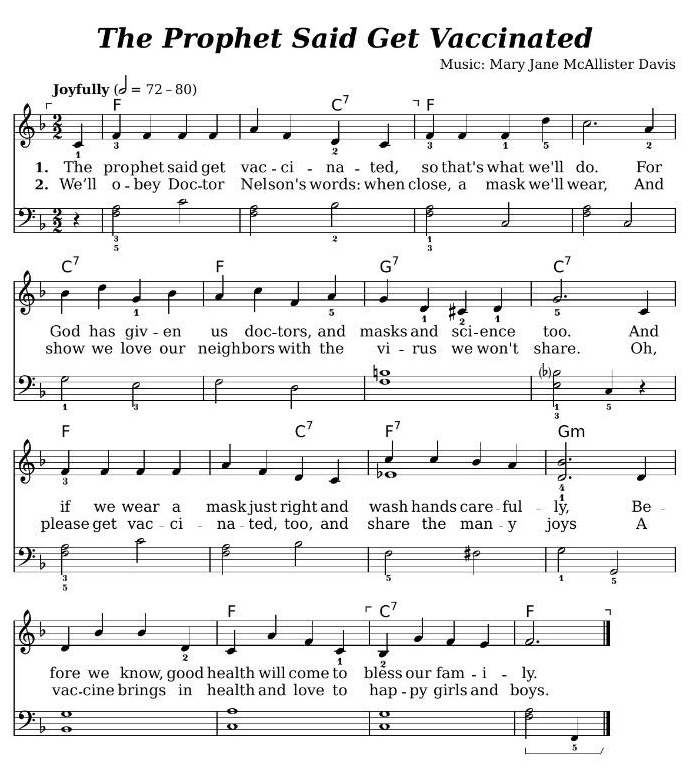 Here's how it sounds:

The prophet said get vaccinated, so that's what we'll do.
For God has given us doctors, and masks and science too.
And if we wear a mask just right and wash hands carefully,
Before we know, good health will come to bless our family.
We'll obey Doctor Nelson's words: when close, a mask we'll wear,
And show we love our neighbors with the virus we won't share.
Oh, please get vaccinated, too, and share the many joys
A vaccine brings in health and love to happy girls and boys.

First popularized in the r/latterdaysaints Reddit group, "The Prophet Said Get Vaccinated" is, of course, a parody based on that timeless classic, "The Prophet Said to Plant a Garden" (Childrens Songbook, p. 237). [1] The lyrics weren't written by Mary Jane McAllister Davis, either (she passed away in 1988). [2]

But some families are taking this song seriously. As one member stated online, 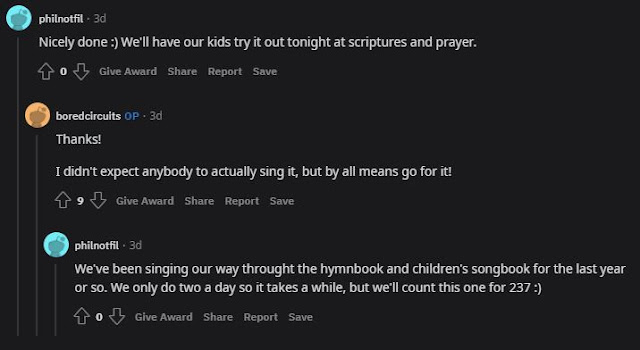 This isn't the first time Primary-age kids have been taught the wrong thing. Here's a screen capture from the Primary 5 (D&C and Church History) manual Lesson #15 ("The Prophet Receives Revelation for the Church") located here: https://www.churchofjesuschrist.org/manual/primary-5/lesson-15 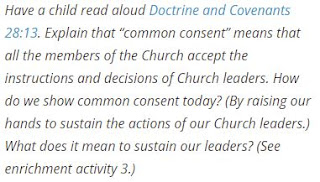 This is, of course, NOT what the Law of Common Consent is all about (read more about it in my past post, "When the Church Breaks One of its Own Laws," here). It is 180 degrees the exact opposite. "Common Consent" used to mean that no action would be taken by the church without the common agreement of the members. "Common consent" never has and never will mean "Common subservience."

Not all votes per the Law of Common Consent are automatically member-endorsed just because the church president said they should be. Just ask Brother Joseph. At a conference in 1843, he questioned Sidney Rigdon's fitness to serve as a counselor in the First Presidency. Other leaders spoke out in support of Rigdon. The assembled Church members voted to retain Sidney in his calling against Joseph's initial wishes. Joseph begrudgingly accepted the result. [3]

But I doubt our kids will be taught that historical anecdote.

Welcome to a New Generation of God Doubters

Along with the funeral dirge [4] song "Follow the Prophet," [5] I think we can safely say that our young ones are being well-indoctrinated in a concept known as "Appeal to Authority" -- a belief that "a claim is true simply because a valid authority or expert on the issue said it was true, without any other supporting evidence offered." [6]

But along the way, some were reportedly hearing clear messages from God which contradicted what others were feeling inspired to do: They felt inspired NOT to get the Covid-19 injection. Many who felt the opposite (inspired to get the jab) began persecuting those who felt differently, accusing them of being Un-Christlike, not being "good global citizens," [8] not loving their neighbors (see the lyrics, above) and disobedient by not "Following the Prophet." Members were systematically, routinely pressured - by other church members -- NOT to hearken to the promptings they received from God.

We've gone from "Doubting our Doubts" to now "Doubting God." No good will ever come of this.

This "The Prophet Said Get Vaccinated " song carries that pressure (to place the words of a man in front of the words of God) down into the ranks of members ages 0-11. A generation fully entrenched in not even seeking divine dialogues, but simply engaging in "Appeal to Authority." Because that's what the masses tell them to do.

Thus, I think we can safely say that 2020 and 2021 were the years in which both adults and children worldwide were instructed, by their church leaders, to fully accept the teaching of "trust in the arm of flesh." Adults are told to trust "medical experts and government leaders." Children are told that the prophet will never lead them astray, [9] despite there being a long list of doctrines which "prophets" contradicted themselves on (after all, then was the last time you heard a lesson on blacks being eternal servants, Adam-God, polygamy, interracial marriage and more?).

European Tyrants Would be Proud

In his book "Europe: A History," [10] historian Norman Davies summarized the five rules of propaganda that European tyrants perfected decades ago:

Where have you seen these ideas used lately?