Over 250 million reasons why the brethren lack discernment

After my last post, I was struck by how consistently church leaders consider church funds as sacred:

“It is a sobering responsibility to administer these sacred funds at Church headquarters.” [1]

“The sacred funds of the Church are carefully budgeted so that the expenditures never exceed the income.” [2]

“We will strictly tailor the program to the tithing income and use these sacred funds for the purposes designated by the Lord.” [3]

This is why I am completely bewildered as to why the church has offered a $250 MILLION settlement to the Boy Scouts of America (BSA) in lieu of thousands of incidents of abuse within LDS-sponsored troops.

And it’s not the first time the church has done something like this.

The Church’s $250 million settlement, combined with another $787 million coming from insurance group The Hartford, totals the settlement to $1.037 billion out of $1.887 billion available. [7] Combined, it is the largest sexual abuse settlement in U.S. history. [8]

Kosnoff calls the $250 million settlement “inadequate” and “an opening offer.” While the BSA has accepted it, U.S. Bankruptcy Judge Laurie Selber Silverstein must approve it. Then it must be approved in a vote by at least 2/3 of the victims. [6]

Kosnoff says he doesn’t think 2/3 of the claimants will agree. [6] 250 million divided by 16,000 equals an average of $16,625 per LDS troop claimant. That’s the amount we’re talking about claimants who, in some cases, were anally raped for years. [9] One attorney for the claimants said, “While the sexual abuse inflicted upon the brave survivors in this case occurred, in some instances, many decades ago, it still feels as fresh as ever.” [7]

The length and breadth of church-involved sex abuse cases

The Perversion Files is maintained by the Los Angeles Times. It contains the actual paperwork of nearly 5,000 cases dating back as far as 1947, all derived from court records. Of those, about 1,900 case files with detailed information about the allegations can be viewed in the database. 86 are from Utah and 51 are from Idaho.

The earliest documented case in Utah dates back to 1976. A member of the Church was accused of molesting a scout in a tent while camping. According to the document, his Bishop knew about this and accusations involving other children, but “he feels that because of the confidential nature of his position as Bishop, he cannot release copies of this information.” These documents were called “ineligible volunteer records sheets.” [10]

Another from 1991 details a member of the church accused of child molestation. The documents says the scout leaders’ “ecclesiastical leader knew about accusations.” But “no charges were filed as the mother was talked out of it at the time by church leaders.” [10]

These instances of the church’s sweeping incidents under the rug and outright covering up are not unique. You’ll find them all throughout this online database. [10]  And the database itself is incomplete; these are just some (likely not all) of the instances through 2004 which have been reported.

This isn’t the only database of abuse accusations against LDS leaders. Here’s a 316 page dossier for your consideration.  Also, Protect LDS Children also has a database of over 1,000 more stories of child sexual abuse in the church.

Here are a few I’ve picked up along the way: 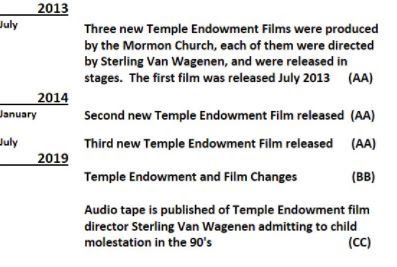 Which brings us to last week

On September 15, 2021, we learned that Dylan Kevin Whiting, 33, of Nampa, ID had been arrested in April. Whiting had “served as a lay bishop [of Nampa’s 30th Ward] in the LDS church from December 2019 until January 2021, when he was removed from his position after the church became aware of allegations against him, according to a church spokesperson.” [11]

“According to an affidavit from the Nampa Police Department, the two individuals in Whiting’s case are known to him personally rather than through his church involvement. The abuse allegedly occurred between 2011 and 2020,” while he was serving as bishop. [11]

In response, the church said in a press release, “Upon learning of these allegations in early January, Church officials immediately took steps to remove this individual from his lay leadership position in the Church. Abuse of any kind is not tolerated in The Church of Jesus Christ of Latter-day Saints. Anyone who engages in such behavior is rightfully subject to criminal prosecution and also faces discipline from the Church, including loss of Church membership.” [11]

Then on September 16, 2021, it was disclosed that a former Latter-day Saint bishop had been accused of inappropriately touching a teenage girl during a girls camp. James Douglas Robinson, 63, was charged Thursday in Duchesne, UT County's 8th District Court with forcible sexual abuse, a second-degree felony. [12]

The alleged incident happened in June at Reid Ranch Resort in Hanna, Duchesne County. A 15-year-old girl said she was alone in a kitchen area when Robinson, her church bishop at the time, approached her from behind, "pinning her to a kitchen counter," and inappropriately touched her over her clothing, according to the arrest warrant affidavit. [12]

I’m not sure why it took a month to notify police (in July) and another month for the victim to be interviewed (August). But the investigating sergeant wrote that during the course of this investigation, he learned that Robinson had moved to Idaho.

"The church reported these allegations to law enforcement as soon as they were brought to the attention of local leaders and the individual was immediately released from his leadership position to allow him to focus on his legal defense," church spokesman Sam Penrod said in a statement. "The Church of Jesus Christ of Latter-day Saints has zero tolerance for abuse of any kind and is awaiting the outcome of this case in the legal system before commenting any further." [12]

Regarding the church’s statement:

Both Whiting and Robinson are innocent until proven guilty in a court of law. My heart breaks for these victims, and I hope they can eventually gain a measure of peace in their lives after undergoing these horrific instances.

With all these atrocities committed over decades, how can any rational parent know beyond a shadow of a doubt that it's safe to have your child alone with a youth organization leader? I mean, if they're potentially not safe around a bishop, then who can they be safe around?

But another issue remains.

In the hyperlinked list above, I spotlighted cases involving full-time missionaries, bishops, a high councilman, a seminary teacher, mission presidents and the director of the church's temple films. The common denominator in these last two reports – as well as many of the ones mentioned above – is that the cases involved actively-serving Bishops, who:

“We have more than eleven thousand bishops in the Church. Every one is a man who has been called by the spirit of prophecy and revelation and set apart and ordained by the laying on of hands.” [13]

“The offices of bishop and branch president and counselors are sacred in this Church. The men who hold those offices are respected by the Lord, inspired by His Spirit, and given the powers of discernment [judgment] necessary to their office.” [14]

We are told that “We are blessed with revelation; the Church is built upon that foundation.” [16] We are also told that God is omniscient (knows all things) and has an overabundance of love for his children.

In my opinion, there is a disconnect somewhere in that last paragraph:

Here’s how the church might respond to my questions above:

“The LDS Church has long had a highly effective approach for preventing and responding to abuse. In fact, no religious organization has done more. Although no one system is perfect and no single program will work with every organization, the LDS Church’s approach is the gold standard."

The actual “Gold Standard,” in my opinion, is The Presbyterian Child Advocacy Network's "We Won’t Let it Happen Here: Creating a Child Safe Church" program. It says that "Minimally, churches should have:

The church -- especially its local wards and stakes – generally have none of these precautions.

So, you tell me: Where is the inspiration and revelation that serves as the foundation of this church? Where are the policies which supersede, and are superior to, those of the Presbyterians?

Could it be that they either don’t exist, or they’re coming from a source that delights in the perpetual abuse of children?

“But whoso shall offend one of these little ones which believe in me, it were better for him that a millstone were hanged about his neck, and that he were drowned in the depth of the sea.” [17]

We all know the destiny of the abusers. But what could be the fate of those who, FOR DECADES, have covered up abuse with ecclesiastical pressure, hush money and non-disclosure agreements, guilt shamed and gaslighted victims, involved lawyers before law enforcement and let perpetrators not only go on to abuse again, but also placed them again in positions of trust?

…AND proposes paying out $250 million in legal settlement money, when that allocation could have been prevented had leaders truly had discernment?

Is the worth of souls REALLY that great to the Church?

"The men who hold those offices are respected by the Lord . . ."
What an absurdly arrogant claim. The Lord knows everything about each and every one of us, including all of the dumb things we have thought, said, and done. Meanwhile, He is the ultimate ideal in everything good. The Lord loves us, but why on earth would He "respect" any of us? Ridiculous.

Good point! The more I do these posts, the more I discover these General Authorities are totally unfamiliar with the scriptures.

"Then Peter opened his mouth, and said, Of a truth I perceive that God is no respecter of persons" (Acts 10:34)

The funds of the church are only "sacred" when being discussed with the plebes.

When the church screws up, or decides to build fancy real estate projects, the "sacred" nature of such funds is much less important.

Thanks for this thorough analysis, LD. I knew the problem was bad, but I had no idea it was as bad as this.

When a bishop is playfully inserting objects into teenagers, that's not a first-time event; it's an indication that the "relationship" has been ongoing for some time. You can't dismiss something like that as "falling into temptation during the heat of the moment.

This Church has an epidemic on its hands, and clearly not all instances are ever reported.