Satan's Plan of Compulsion Has a New Apostolic Friend

I'm going to assume you're pretty well-versed in the whole pre-existent Council in Heaven doctrine, in which plans from Lucifer and Jesus were presented to Father.

"Lucifer, however, contended for an amendment to the plan whereby we would all be saved by compulsion." [1]

"Satan's proposal of compulsion was rejected by the Father, and Lucifer "was angry, and kept not his first estate; and, … many followed after him. (Abraham 3:28)" [2]

"Compulsion," or compelling/forcing one to do something, is "not compatible with the Lord's plan, but rather kindly persuasion through love and patience." [3]   These are concepts we've been taught since we were in Primary.

As we grow from childhood to adulthood, we become more familiar with human dynamics and politics. We learn that "Force and compulsion will never establish the ideal society. This can come only by a transformation within the individual soul-a life redeemed from sin and brought in harmony with the divine will." [4]

As an adult, we become more familiar with the dynamics of Christ's gospel. We understand that "There is neither force nor compulsion in the gospel of Jesus Christ, only love, mercy, and opportunity." [5]   Over time, we arrive at one inescapable conclusion:

"We simply cannot force others to do the right thing. The scriptures make it clear that this is not God's way. Compulsion builds resentment. It conveys mistrust, and it makes people feel incompetent. Learning opportunities are lost when controlling persons pridefully assume they have all the right answers for others. The scriptures say that "it is the nature and disposition of almost all men" to engage in this "unrighteous dominion," [6] so we should be aware that it's an easy trap to fall into."

In other words, compelling someone to do something -- compulsion -- isn't cool and doesn't align with the gospel of Jesus Christ. 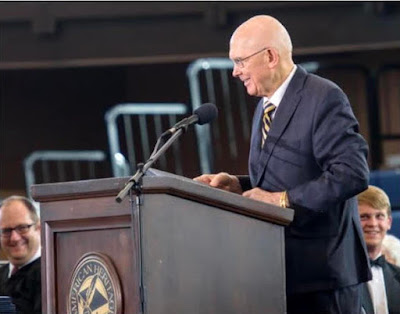 It's serious education. "Many of the 23 seniors have received admission and scholarships to various colleges including Brigham Young University (Provo and Idaho), Purdue University, Southern Virginia University, University of California at Santa Barbara, Edmonds College, University of Utah and LDS Business College." [11]

American Heritage already is one of the largest private schools in Utah. The school's campus in American Fork serves 1,100 K-12 students on 40 acres.

And that's just for starters. American Heritage School plans to open a campus near downtown Salt Lake City in 2022. It will lease a building (currently a stake center) from the church, which will be repurposed as a K-8 school in a year, and will add high school students as soon as possible thereafter. [12]

Drawing Compulsion with a Smiley Face

This is likely a lot of credibility (to the church) on the school's part, which makes Pres. Oaks' speaking at their first Senior Commencement even more plausible.

We don't have a full copy of Pres. Oaks' address; he has reportedly asked that it not be released for a year. So, so much for the church's supposed commitment to being as transparent as it knows how to be. [18]

However, he has permitted a portion of it to be made public. You can read it here or below:

"Don’t limit your sources of information to media representing positions with which you agree. Be acquainted with what you can call “the other side.” And don’t limit your learning to what you can get in a few minutes on a hand-held device. Be a regular reader of newspapers and magazines.

Here is an example of the incomplete, fake, and distorted "niche-learning" I mentioned earlier. Any student of history knows that in order to associate in a community people must grant their public officials (government) the right to compel or forego some behavior detrimental to the public health, safety and welfare.

We can argue about what actions our governments should be allowed to compel or forego, but there is no doubt whatever that the whole idea of living in communities with others requires us to give up certain freedoms. It requires us to be subject to government authorities.

I am therefore discouraged when members of the Church write me letters saying that their God-given “free agency” has been impaired by government requirements they do not approve.

Please focus your efforts on what government laws and policies should be and who should make them and forego denouncing routine government action as an infringement on your free agency." [13]

NOTE: A few have asked where I got the excerpt of Oaks' address. Well, it used to be online (https://courier.veracross.com/ahs/email/39244), but its since been taken down. Luckily, a member of the AHS staff sent the approved excerpt to a friend, who shared it with me. I have redacted the staff member's and my friend's email addresses for their confidentiality.

(Personally, I'm amazed (in a good way) that Pres. Oaks would encourage us to not limit our sources of information, and to "be acquainted with what you can call 'the other side.'" I'll remember that counsel the next time a church member encourages me to stick only with approved sources.)

But what really fascinates me is how gracious he is with the concept of governments compelling its citizenry to do something. In fact, we are supposed to grant our public officials, our government, with the right to compel some behavior detrimental to the public health, safety and welfare.

Pres. Oaks never specified what those behaviors might be, but he did say you should "forego denouncing routine government action as an infringement on your free agency." Just sit down, vote and shut up. And no complaining, k?

You just read quite a few quotes about Satan and his plan of compulsion. You also read D&C 121:39, where we read what happens when "almost all men" "get a little authority" - "they will immediately begin to exercise unrighteous dominion." Could this scripture also apply to national governments? It would be horribly naïve to think not.

Then, once a national government gets "a little authority" and begins to exercise unrighteous dominion, could D&C 121:37 kick into gear, allowing said government to exercise control or dominion or compulsion upon the souls of the children of men?

According to Pres. Oaks, you are unjustified in complaining when your "God-given 'free agency' has been impaired by government requirements." You should "forego denouncing routine government action as an infringement on your free agency."

So, let's get this straight:

I have no idea what Captain Moroni would be saying about all this right now, but what I do know is that:

One of these years, Pres. Oaks may be the President of the Church. There is no doubt that he will (unapologetically, of course) continue to be an apologist for government overreach into individual liberties and a critic of those denouncing such government overreaches - a far cry from another man who was described as one who could shake the very powers of hell.

I have no doubt that if Pres. Oaks were given an opportunity to rebut my observations, I would get quite a schooling in what is legally permissible in the United States. But as we all know, just because something is legal doesn't mean it's right. Speaking some years ago to members of the legal profession, President James E. Faust cautioned:

"There is a great risk in justifying what we do individually and professionally on the basis of what is 'legal' rather than what is 'right.' In so doing, we put our very souls at risk. The philosophy that what is legal is also right will rob us of what is highest and best in our nature. What conduct is actually legal is, in many instances, way below the standards of a civilized society and light years below the teachings of the Christ. If you accept what is legal as your standard of personal or professional conduct, you will deny yourself of that which is truly noble in your personal dignity and worth." [17]

What a position to be in, as humanity prepares for the return of it's Lord, Savior and King.

I wonder what the very powers of hell are thinking now.

Oaks has quite a bit to answer for. Namely taking a position on the Utah Supreme Court in order to avoid being arrested and charged for fraud from his actions as President of BYU.

It was totally legal for Nazi's to round up people they didn't like and put them in concentration camps. The German people believed the government was doing what was best for the nation in restricting freedoms. Many LDS leaders in Germany during that time (as well as many other Christian sects) were very supportive of their government. History repeats.

I agree with this post. We live in perilous times and must be vigilant in making sure we live our lives in accordance to what is truth.

The link to Oaks' address leads to a Blogger sign-in page. Are you able to update it with the correct address?

I have updated this post with new information re: the source of Pres. Oaks' remarks. Please look for the blue text around midway down the post.