Right now, I'm reminded of one of my most memorable conference moments of all time.

It was the Sunday Morning Session, April 5, 2021 General Conference. As you can see in the video below (at the 48:28 mark), President Oaks thanked "the Brethren for your great messages." This was after Sister Reyna Aburto had also spoken.

(My bet: It has become so normalized that conference talks are given by men, that it isn't surprising he forgot to include her in his comments).

The Essentiality of Women in the Church

Despite that little mix-up, the Church reportedly needs and values women a great deal. Here is what President M. Russell Ballard said at a BYU Women's Conference on May 1, 2015:

"For years I have spoken about the power of councils with faithful women participating. Your insight and counsel are absolutely essential." [1]

A month earlier, Pres. Nelson said this in the April 2015 Conference:

"We, your brethren, need your strength, your conversion, your conviction, your ability to lead, your wisdom, and your voices. The kingdom of God is not and cannot be complete without women who make sacred covenants and then keep them, women who can speak with the power and authority of God!" [2]

"Sincerely asking for and listening to the thoughts and concerns voiced by women is vital in life, in marriage, and in building the kingdom of God." [3]

"You sisters do not hold a second place in our Father's plan for the eternal happiness and well being of His children. You are an absolutely essential part of that plan."  [4]

He also stated in the same conference,

"In this Church the man neither walks ahead of his wife nor behind his wife but at her side. They are co-equals in this life in a great enterprise." [5]

"… It will be … female exemplars of the Church [who] will be a significant force in both the numerical and the spiritual growth of the Church in the last days." [7]

All that "Essentiality" at Conference

Unfortunately, that "significant force" of women doesn't exist in the upper echelons of the church.

In the 1980s and beginning the 1990s, generally one woman spoke per conference (unless an organization president was released). Around 2002, the number went up to three female speakers. [8], [9]

Since 2010, women have typically delivered between 1 and 4 (usually 2) General Conference addresses:

Which means in the aggregate that they give roughly 10% of the conference talks: 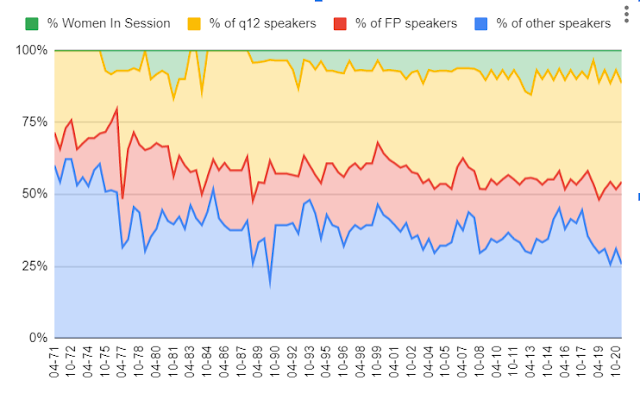 Please check out these pictures. Does anything look a little lop-sided to you? 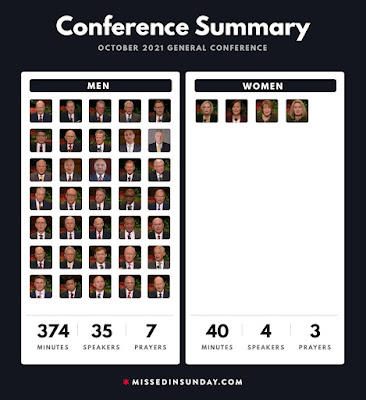 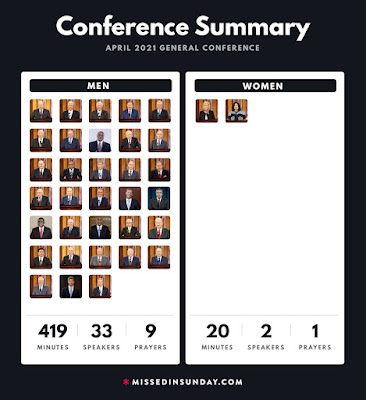 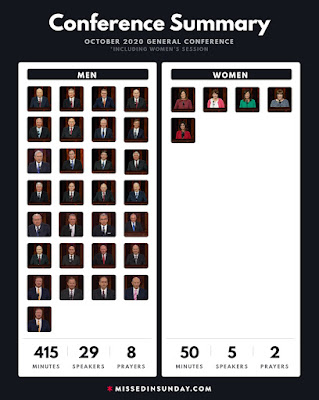 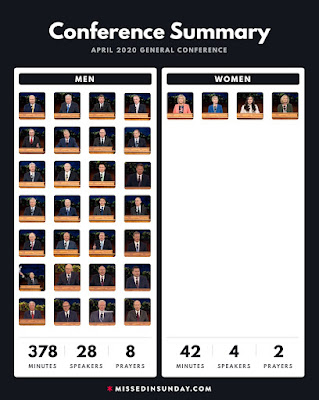 So, I think the evidence is pretty obvious: On one hand, the church says we need to listen to women. But on the other hand, it consistently invites disproportionately fewer women to speak.

How are we supposed to hear them if they're hardly speaking?

The church wants to continue to be able to say that women are important…without actually showing it.

It says how important women are, but then treat women as some kind of afterthought. Women are so important that the speaking ratio is abysmally male-centric.

Looking at this data above might lead you to ask at least one of the following questions:

When the Salt Lake Tribune asked about the drought in female conference speakers, Church spokesman Eric Hawkins had no comment, saying only that the governing, three-man First Presidency "assigns the speakers" and "there are no quotas." [10]

But in November 2019, one person - Katie Rich - wrote and sent a letter to the First Presidency about the conference speakers' gender inequity, and received a (comparatively lengthy) response (you may have to zoom to read these): [11] 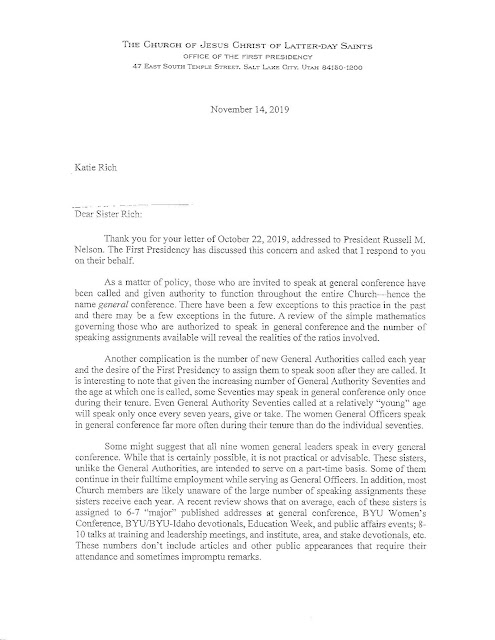 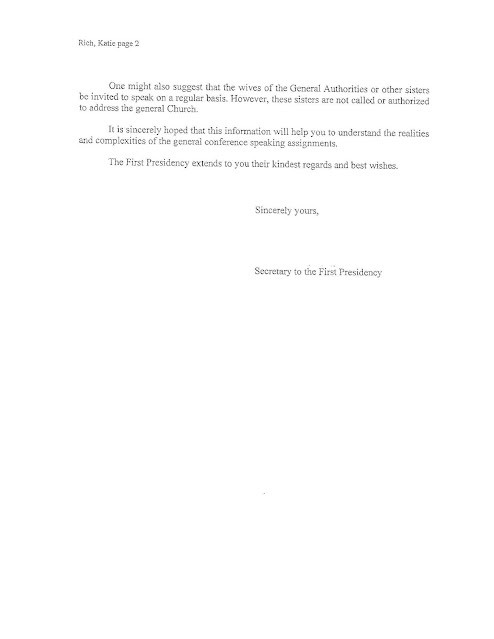 In my opinion, the First Presidency's responses are pathetic, insulting, hurtful and disempowering. They send a message that (1) it's OK to talk out of both sides of your mouth, (2) hypocrisy among leaders is acceptable behavior and (3) women do not have a meaningful place among the church's top leadership (at least during General Conference).

One could say, "Why do you care about the speaker's gender? The Spirit is the real teacher, and its instruction can come through a man or a woman equally." They could also say, "God is no respecter of persons so it doesn't matter to God (nor should it matter to you) if women speak or not." Also, "Why aren't you trusting the Lord/sustaining the Brethren who call people to speak?"

However, by minimizing womens' voices in General Conference,

I find it ironic that the First Presidency would say that "As a matter of policy, those who are invited to speak at general conference have been called and given authority to function throughout the entire church."

The curtailing of women serving in more church leadership positions is one of the greatest hinderances for growth in the church. How can the church possibly hope to make greater strides with potential female convert baptisms when its disdain for female leadership is readily apparent to the world every six months?

It's clear that the Brethren are conflicted as to what to do. For example: Speaking of sisters, Pres. Ballard said this at a Europe Area Sisters' Meeting on September 9, 2014:

"That you will let your voices be heard, we cannot, we cannot meet our destiny as the Church of Jesus Christ of Latter-day Saints in preparing this world for the 2nd coming of the Savior of the world without the support and the faith and the strength of the women of this church. We need you. We need your voices. They need to be heard." [ https://www.youtube.com/watch?v=WSWPrzICnlQ ]

"Don't talk too much in those [ward or branch] council meetings. Just straighten the brethren out quickly and move the work on."

So, in other words, we need your voices! Now don't talk too much...

(Pres. Ballard has left the door open to shut down any woman who tries to "straighten the brethren out." All they have to do is claim she's talking "too much" and BOOM. Nobody will hear a word she says from then on. Kinda like this YouTube: https://www.youtube.com/watch?v=LS37SNYjg8w).

As one sister said,

"Our leaders say: Sustain and obey your priesthood leaders.

Our leaders say: Don't criticize the brethren, even if they're wrong.

Our leaders say: Sisters, step forward, speak up, we need your inspiration.

Obeying that last directive requires going against a lot of cultural conditioning.

As long as our model is patriarchal, partnership is impossible, and women will continue to choose silence over unsolicited assertiveness." [12]

Back in the day, the women's session was a week before General Conference, but the only male speaker was always one member of the First Presidency. This was usually a time for the women in a stake to gather and socialize and share a meal before watching together. The meal was mostly dropped when the women's session was expanded to include primary age girls. Then, when it was incorporated into General Conference weekend, there was no more special treatment and the speaking slots have quickly filled with male speakers. Now, there is no more women's session at all.

Please don't hate me because my view is different, but according to the scriptures, women are not supposed to be speaking at all. You can read it for yourself here:

1 Corinthians 14:34
"Let your women keep silence in the churches: for it is not permitted unto them to speak; but they are commanded to be under obedience, as also saith the law."

When the church is set in order, by the One Mighty and Strong (D&C 85:7), there will very likely be no more women speaking in conferences at all. Period.

That scripture came to mind as well. Was Paul wrong when he wrote that? Speaking as a man? It's in the Bible, isn't it?

In general I'd prefer that this monstrosity known as General Conference discontinued until all the charlatans are out of office.

Thanks for bringing up 1 Corinthians 14:34. That scripture has always intrigued me.

D&C 93:24 tells us that "truth is knowledge of things as they are, and as they were, and as they are to come." Truth is the same in every age and culture. It does not change with conditions or time. God is the source of all truth. He doesn't change, either.

Judges 4:4 tell us that Deborah, a prophetess, judged Israel. "and the children of Israel came up to her for judgment." Her judgment required her to speak, and it was just that judgment which delivered Israel from the Canaanites. 2 Kings 22:14 says that Hilkiah the priest, and Ahikam, and Achbor, and Shaphan, and Asahiah, went unto Huldah the prophetess and they communed with her. Nehemiah 6:14 also acknowledges that Noadiah was a prophetess.

Prophetesses were found in apostolic times, too, including Anna (Luke 2:36) and the four daughters of Philip the evangelist (Acts 21:9).

What we do know is that Paul says that instead of speaking, women should be in submission. This implies that the Corinthian women were speaking in an insubordinate way. The fact that Paul said in chapter 11 that women could pray and prophesy, and in chapter 14 that two or three people (not just men) could prophesy in a worship service, shows that women were allowed to have a slot in the speaking schedule. It is not insubordinate for them to speak prophecies; it is therefore likely that Paul is prohibiting some less-formal speaking, such as chatter or comments from the audience.

We should also remember that Paul's message in 1 Corinthians is basically a set of instructions to the saints in Corinth. Were his letters written with the intention of instruction for the saints 1800 years later? There is no indication of that.

At the age of 70, Lucy Mack Smith, mother of the Prophet Joseph Smith, delivered an address in the Nauvoo Temple. Not only did she speak, but according to the Times and Seasons (the Church’s newspaper), she “spoke at considerable length, and in an audible manner, so as to be heard by a large portion of the vast assembly.” Presiding at that 3-day conference (held on October 8, 1845): the Prophet Joseph Smith -- the same prophet who received D&C 85:7 (which you also referred to) 13 years earlier. If women aren't allowed to speak in church, then why did Joseph permit his mother to do so?

It's undeniable that Brother Joseph knew 1 Corinthians 14:34; he completed his work on the Inspired Version of the Bible 12 years earlier. But was his mother's talk just a "one-off"?

Furthermore, Acts 2:17 tells us that "in the last days," "your sons and your daughters shall prophesy." Those daughters are expected to speak up and speak out, and when the Spirit so testifies that their prophesies are spoken under divine mandate, it's our obligation to take them seriously.

Paul, or those representing his words, had women issues. In reading the Pauline Epistles, take anything written about gender roles with a grain of salt.

To appreciate the importance of women in the Lord's kingdom just remember that the first to witness the resurrected Savior, was a woman.

The dropping of the general priesthood and women's meetings is, to me, an indication the church leadership is consumed with controlling and diluting the message. They seem petrified someone will say something bold that will then require them to answer their worldly critics. Why this bothers them beats me. One would think testifying to the world of God's truth is their primary responsibility!

October 8, 1845 was more than a year after the Prophet's death. Not that he wouldn't have let his mother speak at a meeting, though.
I think the church rep's reply to the question about the frequency of conference talks by the sisters is pretty reasonable. If the female leaders are already having to do a lot of speaking in other meetings, why burden them further by making them speak more in Conference when the pool of women from which to choose speakers is so much smaller than the pool of male speakers? At any rate, I've always tended to tune out of conference talks that are extra-brethrenite-culty and delivered in a Sharing Time voice.

Quit watching general conference and then you don't need to worry about this kind of thing.

I don't and I enjoy my conference weekends a lot more.