Not taking the jab? Prepare for your excommunication – Part 2

My last post concerned a member who was excommunicated. I was unfortunately not able to interview the ex-member in question, but now I have. And I have some documentation, too. (Because I’m not overly-anxious to publicize the person’s name, I’ll go with his first initial plus a little more confirmatory information).

In 2017, for a variety of reasons, “D” was no longer motivated to attend the LDS church in his area near Cardston, Alberta. Fast forward to early 2021, when he was (unexpectedly) invited to meet with his stake president. In the meeting, the stake president explained that he had received an assignment from Church Headquarters in Utah.

“It was a complaint against me. It originated in Salt Lake City and came down to the Area Authority Seventy in Alberta. And he (the stake president) was following up on it,” “D” explained.

The Stake President refused to disclose the names of those who lodged the official complaint, but was enthusiastic in explaining the accusation against “D”: That “D” and his family had formed a “religious compound” on his Southern Alberta farm. In response, “D” said that another family was living on his property at the time, helping him build some large greenhouses.

The stake president asked “D” if they were participating in prayers and hymn singing. “D” explained that yes, his family had a prayer and hymn every night, and the other family was welcome (not required) to participate. It was not a religious compound; not by a long-shot.

At this point, the stake president reportedly began asking “D” the temple recommend questions. When he was asked, “Do you sustain the President of The Church of Jesus Christ of Latter-day Saints as the prophet, seer, and revelator and as the only person on the earth authorized to exercise all priesthood keys?”, “D” said, “Frankly, no.”

“D” said that he did not believe that Pres. Nelson’s advocacy of the Covid-19 jab and facemask wearing was inspired. He also said that Pres. Nelson (and the church’s) growing friendship with the Pope and the Catholic Church was similarly uninspired. After some discussion, the meeting ended.

In late January 2021, “D” received a letter notifying him of a forthcoming membership council. On February 9, 2021, both he and his wife attended the meeting which was also attended by the three members of the stake presidency. “D” stood his ground, and his wife shared “D’s” beliefs. A few days later, “D” received a letter confirming the removal of his membership. Despite her agreement with “D,” his wife has not had a membership council held on her behalf.

(I’ve saved the images of the letters in a PDF, with only “D” and his wife’s names, and their ward name, redacted).

When I spoke with the father and brother of “D” a week ago about his excommunication, I was told it was because he publicly refused to get the Covid-19 “vaccine.” Actually, according to “D,” he said nothing publicly about the church’s advocacy of the jab/masks. It was only after “D” admitted his disbelief re: Pres. Nelson’s “inspiration” in a temple recommend interview did the issue surface. Other than that one point, “D” has reviewed the rest of the preceding post and found no problems with it.

Another surprise (but not) is that the accusations against “D” originated in Salt Lake City. Even though D&C 102:18-19 makes provisions for one’s accusers to participate and speak in a disciplinary council meeting, to this day, “D” has no official word as to the identity of his accusers.

In the new General Handbook of Instructions (released February, 2020), Section 32.6.3.2 outlines the criteria for apostasy: 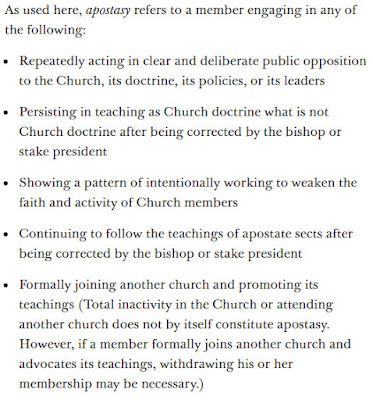 It seems to me that there are three possible conclusions here:

(Additionally, inviting friends into your home to participate in family prayer and hymns may now get you an appointment with the stake president).

In the case of “D”, he could not sustain Pres. Nelson’s “policy” re: Covid-19 injections/face masks, nor its leaders who are continually honoring the Catholic Church and its leaders. So, he was exed.

Or, as I postulated in my previous post (which “D” agrees with as well), “Not taking the jab? You don’t sustain the brethren. Prepare for your excommunication.”

Such a belief no longer imperils just your temple recommend; it is now a prime criteria to nuke your membership and brand you as an apostate.

“I’m still appreciative of the values and morals instilled in me by the church, and still utilize the Book of Mormon on a regular basis,” “D” told me. “I just want to encourage people to walk in the truth. To trust in God, not men.”

The church not following its own rules?

So what else is new?

The Book of Mormon chapters concerning "our day" are being fulfilled before our eyes. It is a time to be both glad & sad. Glad to see the Lord's promises being fulfilled. Sad to realize the prophecies of being lifted up in pride and of denying the power of God concern our own church. Read 2 Nephi 26 - 33, Mormon 8 - 9 and Moroni 1 - 10. What is the message of Nephi and Moroni? It is for each individual to use the power of the Holy Ghost to discern good from evil and the truth of all things and to "rely alone upon the merits of Christ, who is the author and the finisher of our faith."

It is the nature of wicked men to lift themselves up and place themselves as gatekeepers between God and man. The true Gospel rejects this deception. Yes, there must be a church organization and there are prophets and leaders and teachers. But the Lord's admonition is clear: Each and every person who accepts the mantle of the Lord, serves the Lord and not their own interest:

"He commandeth that there shall be no priestcrafts; for, behold, priestcrafts are that men preach and set themselves up for a light unto the world, that they may get gain and praise of the world; but they seek not the welfare of Zion."

The Book of Mormon provides the template of how to approach Christ. When Alma heard the words of Abinadi (a rogue prophet) he was stirred to repentance. He then established a church where he taught people the gospel and, by the authority of God, baptized disciples of Christ in a covenant to serve God and keep His commandments.

Who would be jealous of these good works? Well, it would be the incumbent authorities who disliked what they perceived as competition. But competition for what? If one is working for Zion, what does one fear losing by any who are converted to Christ, even if it is not via your church?

There is a lot we don't know about this story, and the title is purposefully inflammatory.

There is either some history we don't know about, or this is a one off, an exception to the rule.

Had this person merely said their statement correctly, they would have not had to endure this event. It's not that RMN was uninspired, he may have been acting on behalf of the inputs he received from Ensign Investments. It is unethical in my opinion for a spiritual leader to ask it's flock to buy/inject a product it is invested in, period, end of story. That puts the onus of blame not on the 98 year old himself, but the pressure the LDS corporation is putting on the church and directing it.

But if you go all "RMN is a false prophet" by inflection, well, you've got yourself a problem.

I believe the change to utilizing only the stake president in disciplinary courts occurred with the most recent revision to the church handbook of instructions.

There are contested facts.

They would add value and balance.

The member requests their participation.


The opening paragraph is clearly false. I sat on a high council for a period of time and regularly participated in what were then called disciplinary councils. My reading of D&C 102 does not remove the high council from hearing these cases. (verses 12-18, at a minimum).

Dave P above gets it right: The Church not following its own rules? What else is new.

Anonymous #2: Actually, this is not a "one off." Nor is it unrealistic or hiding crucial facts. I spent more than an hour on the phone with the person in question and believe you me, I *constantly* guided the conversation in an attempt to unveil any potential hidden facts. There were none.
Please visit the "Because I am Watching" blog here: https://onewhoiswatching.wordpress.com/2021/10/29/nashville-tn/ to see that this post's title is not inflammatory, but highly realistic.
Still, I acknowledge the fact that this is a heck of a paradigm buster for some people. And IMO even if RMN "may have been acting on behalf of the inputs he received from Ensign Investments," his decisions still would have been uninspired (because I seriously doubt that the Lord also takes his inputs from Ensign Peak).

Anonymous #3: I appreciate and agree with your perspectives as a former high councilman. I believe there are specific reasons why the church made these changes to disciplinary council meetings. Hopefully, I'll blog about it sometime.

Thanks for doing this.

I am not sure what the future holds however requiring people to get an experimental medical procedure, that they don't want, doesn't seem very godly to me.

The definition of apostasy has always been going against the doctrines of the gospel however now it is going against the leaders. We are commanded to strengthen and correct one another not to worship the false gods at church headquarters.

There is so much wrong in the world today and the church is a core part of it.