President Nelson: A Leader to Worship

The first two of the Ten Commandments the Lord gave the children of Israel were "Thou shalt have no other gods before me," and "Thou shalt not make unto thee any graven image, or any likeness of any thing that is in heaven above, or that is in the earth beneath, or that is in the water under the earth."  [1]
The term idolatry usually refers to the worship of a graven image, or an imagined, unseen deity. But idolatry may also exist on many levels: some worship a different deity, other humans, material possessions or achievements. In essence, idolatry is worshipping anything instead of God. It's substituting something in front of, or even in, God's place.
The Old Testament contains seemingly innumerable instances in which the Lord's prophets -- including Isaiah, Jeremiah, and Ezekiel -- denounced idolatry.   [2] The Lord constantly warned Israel against idolatry. Yet Israel disobeyed, and was led into captivity.   [3]
We, too, are of the house of Israel. Ten Commandments are just as applicable today as they were for the ancient Israelites. The message is crystal clear to all, throughout history: Go after a different god, or worship someone or something ahead of God, and you, too, will reap the whirlwind. Nothing -- absolutely nothing -- should come between you and God.
Yet interestingly enough, idolatry seems to have dropped off the Lord's radar, because He's not talking about it anymore. "Idolatry" has been mentioned 194 times in general conferences and discourses stretching back to the 1850s. But as we can see in the chart below, it hasn't been mentioned at all lately -- not since Elder Christofferson brought it up in the April 2012 General Conference. 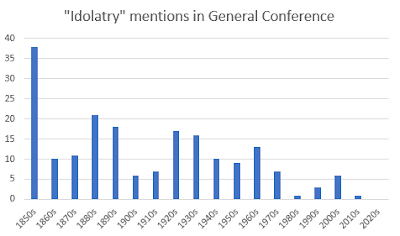 Wow! That's pretty soothing news! Just when I thought people had hit the zenith in their idolatry, it's not a problem (or at least a topic worth noting) anymore.

Latter-Day Idolatry? Nothing to see Here!

Which leads me to a devotional address given four days ago -- June 8, 2021 -- by Sister Michelle D. Craig (Young Women General Presidency First Counselor) at BYU-Hawaii. [4]  On the surface, her topic -- "The Lurking Danger of Spiritual Complacency" -- is definitely appropriate for these days (IMHO, anyone who equates Sun Tzu's teachings with spiritual warfare gets some bonus points).
Unfortunately, none of the Lord's brilliant spiritual warfare strategies and tactics (as often mentioned in the scriptures) were referred to in her talk. Not. One.
She did quote two scriptures, but neither were from the Lord. And she did quote President Nelson -- twice. So, the tally in this talk on spiritual warfare: Nelson 2, Jesus 0.
She does warn how the devil is trying to set you up away from the church president. But there is no mention of a divide between you and the Lord.  The focus is on the devil dividing you away from the church president: 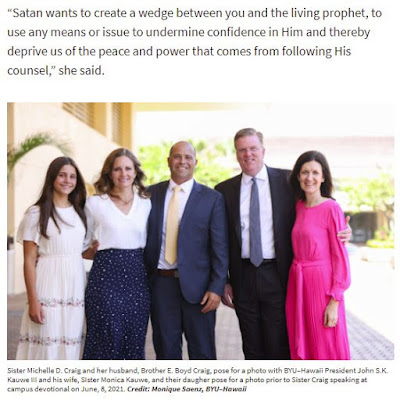 "Satan wants to create a wedge between you and the living prophet, to use any means or issue to undermine confidence in Him and thereby deprive us of the peace and power that comes from following His counsel," she said.
I think you would agree with me that idolatry could be likened as a wedge in between you and God. But now, church-owned publications (like the Church News, which published this article) and church leaders are taking the spotlight off the Lord and onto a mortal, in direct contravention to all the Lord has said about idolatry. In fact, to underscore this point, the Church News is now referring to the Church President with capitalization -- in this case, capital H for "His" AND "Him." Right up there with divinity.
Editing errors? Or a new era?
My vote is "Neither." This isn't the first time the church has subtly reinforced this message that "It's OK to have leaders in between you and God."
Ironically, Elder Andersen said in the April 2018 General Conference, "A prophet does not stand between you and the Savior. Rather, he stands beside you and points the way to the Savior." Yet 11 months later, guess who was doing what in Rome? (I have no idea why Elder Andersen would be standing there grinning as his words are being crushed to powder. Would you?) 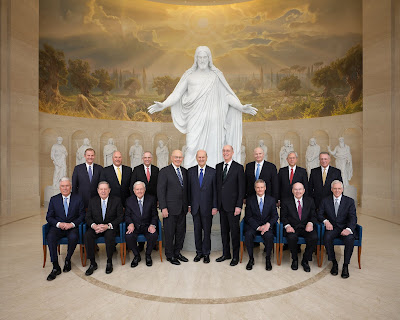 This elevation of the 15 -- to a status where it is perfectly natural to expect them to stand in between you and Jesus -- is strictly reinforced. Over the decades, it has become part of rock-solid LDS culture to stand when a leader enters, stay sitting as long as the leader sits, then stand until he has exited the chapel.

This behavior is reinforced by church leaders at all levels of the church.

Some may say these actions are voluntary, and for some, that's probably true. But (1) that doesn't mean it's the right thing to do and (2) leaders reinforce this behavior anyway. Here is Elder Joni L Koch of the Seventy instructing members to stand upon Elder Gary L. Stevenson's entrance into a chapel:
Members don't equate this stand up / stay sitting / pay extraordinary deference to its leaders as hero worship; they think they are only being respectful to the calling. Yet respect shouldn't mean singling out one person, giving them preferential treatment and ignoring everyone else. It means treating everyone - everyone! - kindly and respectfully.
My bet: Someday soon, it'll be acceptable to bear testimony of the Brethren instead of the Lord.
Far-fetched? Nope. Here's a portion of an email one member received: 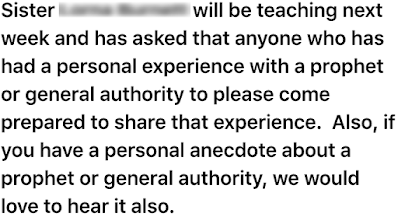 And of course, lest we forget an apostle's birthday… 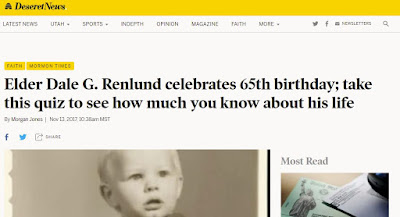 https://www.deseret.com/2017/11/13/20622998/elder-dale-g-renlund-celebrates-65th-birthday-take-this-quiz-to-see-how-much-you-know-about-his-life
So much for this scripture:
"And we talk of Christ, we rejoice in Christ, we preach of Christ, we prophesy of Christ, and we write according to our prophecies, that our children may know to what source they may look for a remission of their sins." [5]
Think this is limited to the Brethren? Think again.
Another member informed me that their stake center has a wall with 8x10 framed professional photos of all the stake presidents over the years. This mirrors my own experiences, where high council rooms devoted many square feet of wall space to the 15 brethren. The Lord? He got an 11x17 picture in the far corner.
"Let nothing be done through strife or vainglory [inordinate pride in oneself or one's achievements; excessive vanity]; but in lowliness of mind let each esteem other better than themselves." [6]
"for that which is highly esteemed among men is abomination in the sight of God."  [7]
"For whosoever exalteth himself shall be abased; and he that humbleth himself shall be exalted." [8]
I shouldn't have to say this, but please…please do the opposite: Come unto Jesus.

Email ThisBlogThis!Share to TwitterShare to FacebookShare to Pinterest
Labels: Leaders

President Eyring in Oct 2014 General Conference said this about the Prophet (italics mine):

Don’t take lightly the feeling you get of love for the prophet of God. Wherever I go in the Church, whoever the prophet is at the time, members will ask, “When you get back to Church headquarters, will you please tell the prophet how much we love him?”

That is far more than hero worship or the feelings we sometimes have of admiring heroic figures. It is a gift from God. With it you will receive more easily the gift of confirming revelation when he speaks in his office as the Lord’s prophet. The love you feel is the love the Lord has for whoever is His spokesman

His words, not mine.