The Covid-19 "vaccines": A "godsend from heaven" "to gather Israel" "on both sides of the veil"?

Yesterday, an audio interview with Elder Rasband was published to YouTube. In it, he ties the Covid-19 "vaccine" to church priorities "to gather Israel" and then calls the "vaccine" a "godsend from heaven":

"In the presence of the prophet, we have prayed that we would have a vaccine not just for the sake of making us healthy and resilient to this Covid-19, but also to allow the church to gather Israel on both sides of the veil. I mean we all know through this prophet, President Nelson, that that's the mission of our era: to gather Israel.
He has said to the youth before the most important work that we're involved with is to gather Israel. And so when you put that as the overlying need for the Church of Jesus Christ of Latter-day Saints, you can understand that with the prophet and others who have prayerfully considered this, that a vaccine is actually a godsend from heaven. And we view it that way. We view it as a miracle the time that it took to develop it the speed at which it was made available in record time compared to other worldwide pandemics."

I think it's interesting to note that the Brethren didn't ask for repentance (the historically-proven antidote to plagues and pandemics), nor a turning to God or better hearing him. I wonder why not.

Is the Covid-19 "vaccine" truly a "godsend from heaven" "to gather Israel" "on both sides of the veil"?

Let's ask BYU basketball player Richard Harward and his family (here's a YouTube to introduce him to you; he seems like a really great guy to me):
Richard Harward is the 6-foot-11, 256-pounder from Orem who's a Senior and plays starting center on BYU's basketball team. [1]
At least, he used to.
On November 4th, five minutes into an exhibition game against Colorado Christian, Richard Harward appeared to have injured his knee. He stood on the court resting his hands on his knees. After nearly collapsing on the bench, he was promptly taken to the locker room, where he sat out the rest of the game.  [2]
On November 9th, BYU's basketball team beat Cleveland State 69-59. Sitting on the bench, in his street clothes, was none other than Harward. In an interview,  BYU coach Mark Pope said of Harward, "He has a cardiovascular issue right now. Doctors haven't given a definitive timetable for his return." [3]
"He's in the best shape of his life, he's playing the best basketball of his life. He is the emotional leader of this entire team over the last two years. His emotional leadership is even a bigger loss than his body on the floor. We miss him. We're hoping he gets back as soon as possible. But we just don't know. It could be days, weeks or months. We're just not sure," Pope told the Deseret News [4]
So let's get this straight: Harward is in the best shape of his life, but he has a cardiovascular issue? Huh? For a young healthy male with no previously disclosed, underlying conditions, it just doesn't make sense that he would suddenly have a cardiac issue.
But apparently, sudden cardiac conditions -- and even deaths -- are mysteriously a prevalent thing in the world of sports these days, especially male sports which features players in their 20s:
Meanwhile...
So, what brought Richard Harward from awesomely healthy to indefinitely down due to a cardiovascular issue?
Well, what hasn't been reported by any media (yet was confirmed to me via a second-hand source who knows Richard's family) is that Richard was given the Covid-19 "vaccine" 8 days prior to the Colorado Christian game.
Another source, who has been in contact with Richard's mom, independently confirmed the fact that Richard recently received the jab. She posted this information online which remains unverified (yet I'm confident that if it were inaccurate, parents Bradley and Alice Harward [1] would set the record straight): 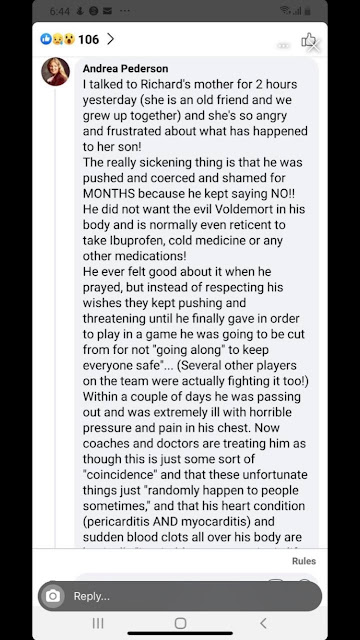 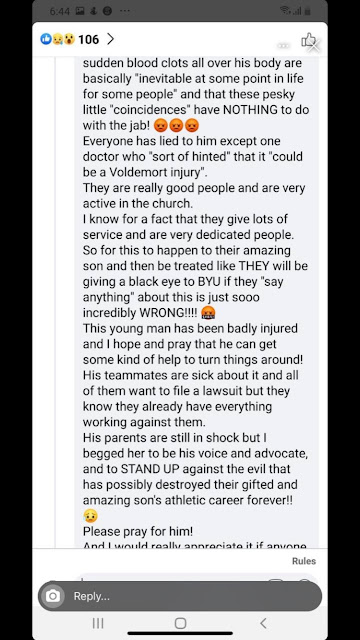 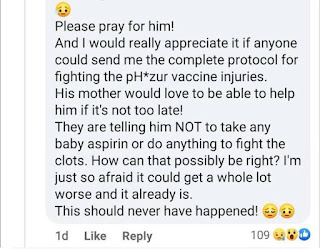 I find it incredible that both "coaches and doctors" are telling Richard that "these unfortunate things (pericarditis AND myocarditis) just "randomly happen to people sometimes" and that "sudden blood clots all over his body are basically "inevitable at some point in life for some people."
What a pack of lies.
Compounding the situation is the fact that there has been zero media follow-up on Harward's condition. Neither the Deseret News, KSL, the Salt Lake Tribune, BYU University Communications, BYU Athletics nor the Daily Universe have said anything about Harward's status since Coach Pope made his comments on November 10th.
So I return us back to Rasband's definitive statements that the Covid-19 "vaccine" is a "godsend from heaven" "to gather Israel" "on both sides of the veil": 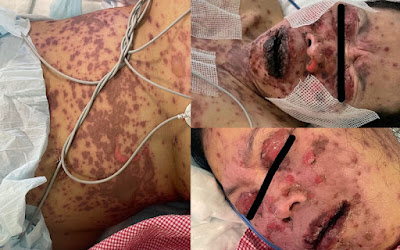 Look! A bona-fide godsend for this lady?
Speaking of godsends: Let's see something God has sent us to help beat back Covid-19, and see how it's been embraced by the Brethren...

The Brethren's Proven Disbelief in the Word of Wisdom

Found on a Facebook page about a year ago:

"Faithful Latter-day Saints claim they obey the Word of Wisdom, yet they generally don't.

We focus on some of the thou-shalt-nots almost entirely—abstaining from drugs and the like, including coffee and beer, despite the former not actually being named, and the latter being actually authorized to use (to a degree).

But we completely ignore other things, like having to eat meat only sparingly—and totally sidestep the broader set of principles.

Someone is deemed compliant if they don't smoke or drink alcohol, yet they can guzzle mind-altering medications, energy drinks, and binge on junk food and be "fine."

This misses the point entirely.

Similarly, during Covid, all we hear is a slanted subset of mandates whose purported purpose is to protect public health.

Why? Because if we actually cared about health—physical and mental—we would be hearing calls for getting good exercise, sunlight, physical contact with loved ones, and eating nutritious foods to boost our immune system and overall health.

But that's not what we're hearing—not at all.

Instead, everyone's salvation apparently rests in a hastily created chemical concoction to be injected into our bodies.

Until then, physical and mental health continues to decline, with scant attention paid to higher principles that might actually help.

Both levels of compliance are superficial and fake."

"I've been saying this! They don't care about our health. Not once have I seen any official mention the importance of strengthening our immune system."

Sometimes I think we are left to ask the same question that Elisha the prophet asked when he looked towards the heavens and exclaimed, "Where are their gods, their rock in whom they trusted?" [8]
We've heard far more from the Brethren about the "wise and thoughtful recommendations of medical experts and government leaders" than we have about the Word of Wisdom. And so far, we haven't heard one word from God, nor his revealed scriptures, nor the word "repent", nor seen any manifestations of healing miracles by and upon those with true faith to heal and be healed.
Not. Once.
Or maybe it's as simple as one fact:
Maybe the government is now the Brethren's God and religion.