Jan. 2022: When the Church of Russell M. Nelson of Latter-day Saints became more emboldened in its worship: Four examples in one month alone. 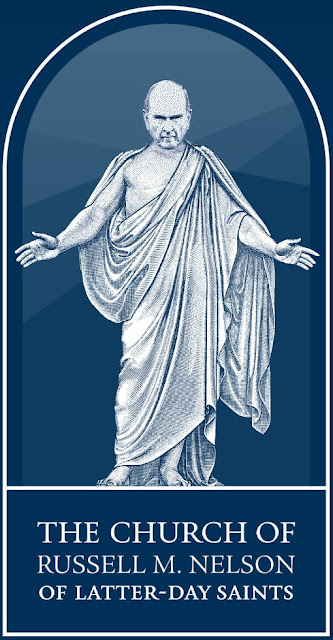 January continues to be a month in which church members are celebrating the transcendence that is Russell M Nelson. Here are a few examples:

In a Europe-area devotional earlier this month, Wendy Nelson asked,

"What would happen in only 30 days if you chose to follow the prophets with exactness?"

She then went on to say,

"Your love for your Heavenly Father and Jesus Christ will grow, as will your desire to keep your covenants with them. Your ability to discern between what is true and what is not will increase." [1]

Which is just the opposite of what Joseph Smith said:

"President Joseph Smith read the 14th chapter of Ezekiel [see, for example, verses 9-10: 'If the prophet be deceived when he hath spoken a thing...the punishment of the prophet shall be even as the punishment of him that seeketh unto him.']...said the Lord had declared by the Prophet [Ezekiel], that the people should each one stand for himself, and depend on no man or men in that state of corruption of the Jewish church -- that righteous persons could only deliver their own souls -- applied it to the present state [1842] of the Church of Jesus Christ of Latter-day Saints -- said if the people departed from the Lord, they must fall -- that they were depending on the Prophet, hence were darkened in their minds, in consequence of neglecting the duties devolving upon themselves..."  [2]

During a Stake Youth Fireside at Fort Mill South Carolina Stake in 2022, newly called mission President Thaddeus Brown spoke about his family's meeting with Elder David Bednar, who set him and his wife apart for the calling.

During that encounter, President Brown's 9 year-old son asked Bednar if he had ever seen Jesus. Elder Bednar responded by saying whenever he hears President Nelson speak, he hears the voice of the Savior.

"Thus saith the Lord God; Woe unto the foolish prophets, that follow their own spirit, and have seen nothing!" [3]

At a January 9, 2022 Young Adult English Area Devotional, Melanie Rasband recounted an incident in which she was late to a church meeting where she was required to sit behind the podium. But as she was looking for a seat near the back, she caught the eye of President Nelson, who was seated on the stand.

"He smiled. I smiled back, despite my embarrassment for being late," Sister Rasband said. Then President Nelson held her gaze as he motioned with his finger for her to come take a seat on the front row. Not wanting to draw attention to her late arrival, Sister Rasband indicated that maybe instead she could stay and sit near the back. But President Nelson continued to smile and again beckoned, with his index finger, for her to come and take the front-row seat that had been reserved with her name on it.

"There was power in that pointing finger," Sister Rasband said.

The New Testament is filled with the Savior's invitations to follow him. Here are a few:

Nowhere, in any of the scriptures, are we invited to follow a mortal. In fact, we are told quite the opposite: that those who follow mortals are destined for Telestial, not celestial, glory:

For these are they who are of Paul, and of Apollos, and of Cephas.

Yet, as often happens these days, there is an exception. Although it has not been canonized in the scriptures (yet), you will be blessed if you follow one and only one mortal: Russell Marion Nelson. Here is his wife again, from the same teleconference, telling us how we can follow President Nelson (Note that never once in her talk does she mention following the Savior. Not. Once.):

"And now how will your life be blessed as you choose to follow President Russell M. Nelson, THE prophet of god on the earth today, who for four years has led The Church of Jesus Christ of Latter-day Saints under the direction of Jesus Christ himself. I'm grateful that my husband is the kind of man who many years before he was called to be an apostle said quote, 'I never ask myself when does the prophet speak as a prophet and when does he not. My interest has been how can I be more like him?' As his wife, may I offer you several examples of President Nelson's life that you may want to emulate."

Idol Worshippers. All of them.

As I wondered in my last post, why is it that the Church isn't mentioning God, his gifts, powers and promises, in any of their mentions regarding Covid? Now you know: We have "a prophet" (which, parenthetically, has not prophesied one thing that I'm aware of). A prophet whose words outrank those of Joseph Smith's. When he points, it's with power. When he speaks, it's as if you are hearing Jesus Christ. And as long as he lives, you should follow him, not God.

It's clear to me that President Nelson wants to be positioned to a status that's on-par with Jesus Christ. Otherwise, he would be condemning such exalted descriptions and examples of him.

Here's what the Lord said about such people:

And what about those who follow -- and encourage others to follow -- such man-made gods? Here's the Lord again:

"They seek not the Lord to establish his righteousness, but every man walketh in his own way, and after the image of his own god, whose image is in the likeness of the world, and whose substance is that of an idol, which waxeth old and shall perish in Babylon, even Babylon the great, which shall fall." [11]

"Cursed is he that putteth his trust in man, or maketh flesh his arm, or shall hearken unto the precepts of men, save their precepts shall be given by the power of the Holy Ghost." [12]

"Whatever thing a man sets his heart and his trust in most is his god; and if his god doesn't also happen to be the true and living God of Israel, that man is laboring in idolatry." [13]

Forget Nelson. Get to know the real Jesus Christ.

A friend recently asked me how I thought one could better know Jesus Christ (beyond prayer, scripture study and serving others).

I said that was a good question, because you first need to know what you're listening for in your prayers and dialogues with God, and if you don't, you're likely to miss what they're saying.

"For to come to know Jesus intimately, as he is, as he wants to be known, is to release a redemptive landslide in your life. There will be no stopping the goodness. The first purpose of your existence will be resolved, and from there you are set to fulfill all of God's other purposes for you.

Consider this one piece of evidence: millions of people who have spent years attending church, and yet they don't know God. Their heads are filled with stuffing about Jesus, but they do not experience him.

The records of Christ are written so you can experience him as they [his disciples] did, this intimate connection with the Father and the Son. John says that you can enjoy the same friendship with Jesus that he knew. For this Jesus came.

So, if you do not know Jesus as a person, know his remarkable personality-playful, cunning, fierce, impatient with all that is religious, kind, creative, irreverent, funny-you have been cheated.

If you do not experience Jesus intimately, daily, in these very ways, if you do not know the comfort of his actual presence, do not hear his voice speaking to you personally-you have been robbed.

If you do not know the power of his indwelling life in you, shaping your personality, healing your brokenness, enabling you to live as he did-you have been plundered.

This is why we pray,

Jesus, show me who you really are. I pray for the true you. I want the real you. I ask you for you. Spirit of God, free me in every way to know Jesus as he really is. Open my eyes to see him. Deliver me from everything false about Jesus and bring me what is true."

The author of that quote -- John Eldredge -- wrote a beautiful book which is (in my opinion) the best book ever written about Jesus. Called "Beautiful Outlaw," its contents provide the best description of Jesus I've ever found. Go here to order it and see what others have said about the book (you can also watch the YouTubes of the book, found here at https://www.youtube.com/watch?v=hmUK0-mwMsk)

The second thing you can do is to watch The Chosen. It's a powerful portrayal of Jesus and his original associates. The actor who plays Jesus, Jonathan Roumie, nails it. Here's the climax of Season 1, Episode 1:

Between those two resources, you should be off to a solid start in getting to know and develop a vibrant, thriving relationship with Jesus.

Because it's time to stop playing with the big kids who think they're cool, and start dialoguing with a God instead.